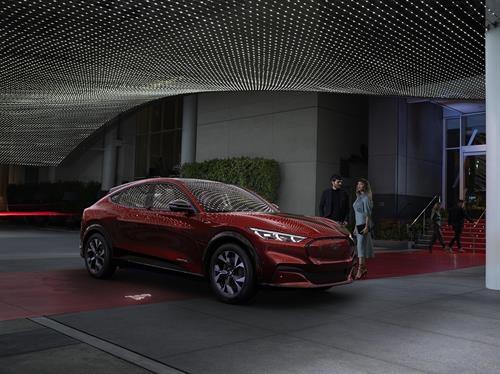 For a vehicle that's only quite recently broken cover and is yet to go on sale, quite a lot has been revealed already about the ground-breaking all-electric SUV, the Ford Mustang Mach-E. It shows how far things have come in the auto industry in the last few years that the idea of a Mustang SUV, and an electric one at that, hasn't caused a cacophony of controversy. So, let's look at what we know about the models and specs of the 2021 Ford Mustang Mach-E.

There are four different versions of Ford's eagerly anticipated electric SUV that you can reserve today from Ford dealers in Southern California. There's also going to be a First Edition AWD model, but the interest in this exciting new vehicle is so great that reservations for the First Edition are already full. The four models you can put your name down for are the entry-level Select, Premium, California RT.1 Edition, and the range-topping GT.

There will be two different battery options, which will be marketed as Standard Range and Extended Range. The smaller Standard Range battery is a 75.7 kWh, while the Extended Range is a 98.7 kWh unit. Whichever version you opt for, the battery is kept underneath the vehicle to maximize internal space and to aid the vehicle's driving characteristics by lowering the center of gravity.

Also, Select and Premium models with the smaller of the two battery packs will have an estimated range on a full charge for rear-drive versions of a very healthy 230 miles. If all-wheel-drive is added, the range is still estimated at an immensely practical 210 miles.

The Premium can also be had in an Extended Range version with the 98.7 kWh battery pack that's standard with the California RT.1. These should be good for an estimated range of 300 miles on a full charge. All-wheel-drive versions are estimated to deliver a 270-mile range.

Base versions of the Mach-E will develop around 255 horsepower, California RT. 1 and Premium extended-range, rear-drive models can deliver around 282 horsepower, while Premium and First Edition models with all-wheel drive can muster 333 horsepower.

For the ultimate electric Mustang SUV experience, the GT will boast an incredible 459 horsepower and 612 lb.-ft. of torque, which will get you from 0 to 60 mph in as little as three seconds when properly equipped.

By the time you go up a level to the Premium, you could start to wonder what's left for the even higher specification models. Don't worry though, Ford has it covered.

To find out more about the amazing 2021 Ford Mustang Mach-E and to be at the front of the line when it's launched, get in touch with the team here at Southern California Ford Dealers right away.