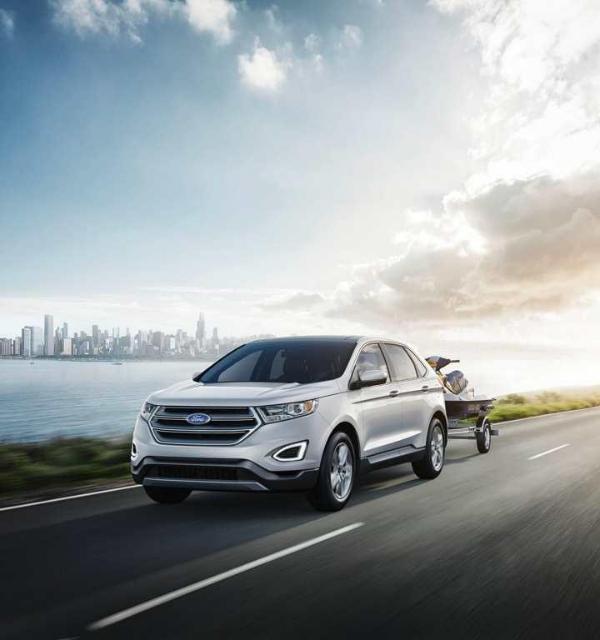 The midsize crossover segment of the auto market covers quite a wide range of vehicle shapes and sizes. Some models squeeze a third row seat in, some don’t bother and some offer buyers the choice of five or seven seats. To see how different two models in the same segment can be, here's a Ford vs Dodge comparison where we compare the 2017 Ford Edge vs 2017 Dodge Journey to see what they have to offer.

This is the first really big difference in our Edge vs Journey contest. The 2017 Ford Edge is modern, sleek, sporty, dynamic and extremely desirable. If you wanted a styling blueprint for a midsize crossover to appeal to as wide an audience as possible, this could well be it. You could say the Dodge is confidently retro in the way it looks, but you could also say it's just dated. Its slab-sided design and boxy shape is to all intents and purposes a minivan without the sliding doors, so this is an easy win in this first round of our comparison.

There are plenty of engine choices in the 2017 Ford Edge. The standard powerplant is an excellent 2.0-liter EcoBoost inline-four developing 245 horsepower and 275 lb.-ft. of torque. The middle engine is a naturally aspirated 3.5-liter V-6, and the most powerful unit is the 315 horsepower 2.7-liter EcoBoost V-6 in Edge Sport models. There are two engines available for the Dodge Journey, and the standard unit is a pretty mundane 2.4-liter inline-four that develops a modest 173 horsepower and 166 lb.-ft. of torque. The optional 3.6-liter V-6 is much more like it with 283 horsepower and 260 lb.-ft., which is a lot more suitable for handling the size and weight of the Journey, especially when fully loaded with passengers and cargo. Even so, this is another clear victory for the Ford.

Looking at the Dodge Journey, and considering it's more than four inches longer than the Edge and offers a third row of seats, it would be easy to assume it was much bigger inside than the Ford. That's not the case though. In fact, the Ford Edge has a total passenger volume of 113.9 cu.-ft., compared to just 99.9 cu.-ft. in the Dodge. And that translates into more leg and head room in the front and the back of the Ford, which is why this is therefore another win for the 2017 Edge.

It's not out of order to suggest the 2017 Ford Edge isn’t the cheapest midsize crossover you can buy, but when you look at the features and equipment you get for the money it does represent pretty good value. But if there's one attribute that keeps the Dodge Journey selling it has to be the price. With a starting MSRP of just $21,145, the Journey really is one of the biggest bargains in the current auto market. You do have to go up a trim to the SXT to get seven seats as standard, but even then it only costs from $25,045 and you do get a lot more standard kit too. The Ford is very good value for money, but this is an area where the Journey gets its first win over the Edge.

You can get more information and arrange a test drive right now in the 2017 Ford Edge by getting in touch with us today here at Southern California Ford Dealers.