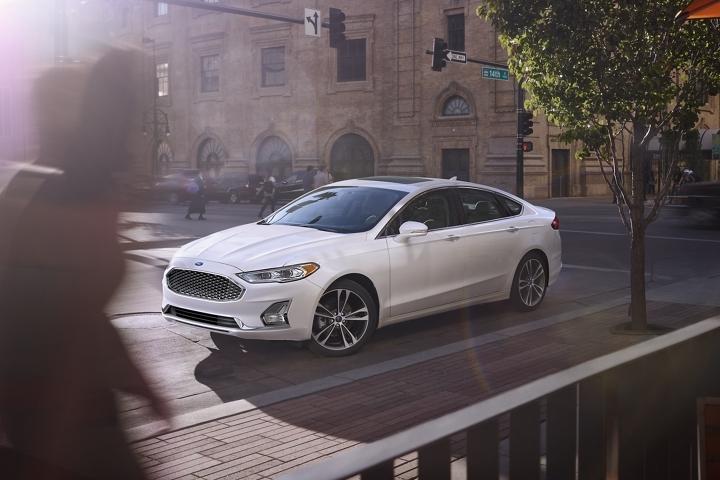 A lot of people have been overlooking sedans and turning to SUVs in recent years, but they could be missing out. It wasn't long ago that the midsize sedan segment was the most fiercely competitive area of the auto market, and the Ford Fusion was generally regarded as being the model to beat, outside of the luxury segment. The 2020 Ford Fusion Plug-In Hybrid Titanium is a stunning car and the very epitome of a modern 21st-Century vehicle, so let's review the specs and features to reveal what some people might be missing.

Of course, the most important feature of the Ford Fusion Plug-In Hybrid Titanium is the powertrain. The system employed is the same as the one found in the standard Fusion Hybrid, but the plug-in version adds a larger battery for a greater electric-only range.

The system is based on a 2.0-liter Atkinson cycle inline-four gas engine, which is paired with an electric motor to develop a combined 188 horsepower. The power is sent to the front wheels through a continuously variable automatic transmission (CVT), and there's a 1.4-kWh battery located in the trunk of the regular Fusion Hybrid. However, the Fusion Plug-In Hybrid swaps that 1.4-kWh battery for a 9.0-kWh battery, which gives an electric-only range of up to 25 miles*.

Interior and exterior features and equipment

Because the plug-in version of the Ford Fusion is only available in Titanium trim, it really does come very nicely equipped in its standard form. On the inside you'll find Leather-Trimmed Sports Seats that are Heated and Cooled in the front, a 10-way Power Driver's Seat, Dual-Zone Climate Control, Sync® 3 Infotainment System with Voice-Activated Navigation and HD Radio, a 12-speaker Sony Audio System, Push-Button Start, Adaptive Cruise Control, Rain-Sensing Wipers, Ambient Lighting and plenty more.

The Fusion Plug-In Hybrid is positively bristling with standard safety features, many of which are part of the Ford Co-Pilot360™ system. The car comes standard with the likes of a Rear View Camera, Individual Tire Pressure Monitors, SOS Post-Crash Alert, and Personal Safety System™. On top of that, standard advanced safety features include a Lane-Keeping System, BLIS® (Blind Spot Information System) with Cross-Traffic Alert, Pre-Collision Assist with Pedestrian Detection, and an Auto-Dimming Rear View Mirror.

These plug-in hybrid cars and not ordinary sedans, of course, and that becomes apparent when you look at the dash and the LCD SmartGauge® with EcoGuide. The system provides real-time information for the driver so they can enhance the efficiency of the already-efficient midsize sedan. The system can show you the engine power being used and the amount of lithium-ion battery power that's been used and what's left. It also shows how close you are to reaching the gasoline engine on-off threshold, and how much power is currently being requested based on how much you are pressing down on the accelerator pedal.

To learn more about these Ford plug-in hybrid cars and to try one out for yourself with a test drive, get in touch with us today at one of your local Southern California Ford Dealers.