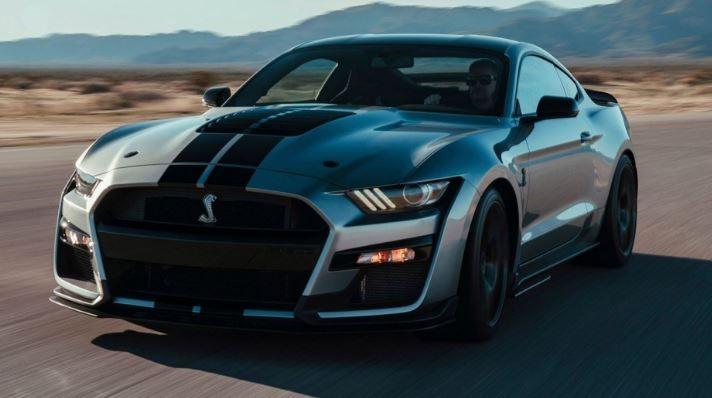 Hold on tight – the most powerful Ford ever, the 2020 Mustang GT500, has arrived. During its recent debut, the fast-paced pony captivated audiences at the Detroit Auto Show. And soon, it will be hitting showroom floors.

So, what qualifies the 2020 Mustang GT500 as the most powerful car to ever wear the blue oval? A total of 700-plus horsepower and 650 lb.-ft. – that’s what. Even the 645 horsepower GT flagship supercar comes in 53 ponies shy of the new Mustang’s rating.

A peek at the powertrain

The engine found in the other Shelby Mustang, the GT350, serves as a basis for the DOHC 5.2L V8 found in the GT500. Innovative features – such as an aluminum oil pan with hinged doors that close under acceleration to prevent lack of lubrication – are found throughout the GT500’s powerplant. There’s also an upgraded cooling system with six heat exchangers, and up top, an Eaton TVS R2650 supercharger providing 12 psi of boost.

Naturally, such a powerful engine requires a heavy-duty transmission. Ford decided to use a seven-speed dual-clutch unit because a traditional automatic or manual wouldn’t be strong enough. Rumor has it the transmission can shift in about a tenth of a second.

After leaving the transmission, power routes through a carbon-fiber driveshaft to a Torsen limited-slip differential. The stout diff’ features 3.73:1 Gears and upgraded CV half shafts. A line-lock feature is available to secure the rear end and send the tires up in a cloud of smoke.

Altogether, the powertrain is expected to propel the GT500 through the quarter mile in just 11 seconds, making it not only the most powerful Ford ever, but also one of the fastest cars in the world. Zero to 60 mph is expected to be in the three-second range, a figure that’s also segment-leading. Top speed is rumored to be around 200 mph.

Although the Ford Mustang Shelby GT500 packs plenty of power, it’s more than just a straight-line racer – it can handle curves, too. The undercarriage, which is based on the GT350, features stiffens springs, an extra-thick anti-roll bar and retuned dampeners. A magnesium strut tower brace is also present.

Rolling stock is 305/30ZR-20 tires in front and 315/30ZR-20 tires in the rear, both of which can be upgraded with the available Carbon Fiber Track Package; a bundle that adds, among other upgrades, carbon fiber wheels.

The GT500 shares similarities with its sibling, the GT350, but has many distinct exterior features as well, such as a rear diffuser and rear wing. Also, the front fenders and power bulge hood, both made from sheet molding, are unique. Beyond that, the ultra-powerful car is instantly recognizable with classic Mustang styling from front to rear.

Some sources speculate the 2020 Mustang Shelby GT500 may begin to appear in showrooms toward the end of the 2019 model year. To learn more about the most powerful Ford ever – and to check out the current Mustang lineup – visit your local Southern California Ford Dealers.