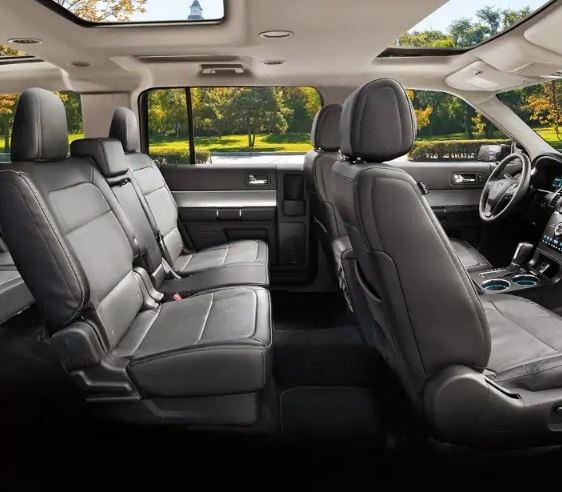 Even though the Ford Flex is a midsize crossover SUV that's been around in much the same form since as long ago as 2009, it's still every bit the incredibly versatile, capable, distinctive and family-friendly vehicle today as it was when it was launched. If you want a spacious and capable crossover to accommodate up to seven people and their belongings here's why the 2019 Ford Flex SEL might just be the vehicle you’re looking for.

If you think back to a few years before the Ford Flex SEL and the other trim levels of these Ford SUVs came onto the market, you might remember Ford used to own a certain British automaker that's famed for making some of the most capable luxury SUVs in the world. One of the models that company built at the time bears a striking resemblance to the Flex, but while that British luxury SUV has now been redesigned, the Flex has kept this uncompromising, boxy look that's as unique now as it is practical.

The standard engine under the hood of the 2019 Ford Flex SEL is a 3.5-liter Ti-VCT V-6 that develops 287 horsepower and 254 lb.-ft. of torque, which is sent to the front or all four wheels through a six-speed SelectShift automatic transmission with shifter button activation. Front-drive is the standard configuration of the Flex SEL, but all-wheel drive is an available option.

The SEL obviously starts with all the basics you'd expect from a vehicle of this stature, such as a full set of power features, reverse sensing system, privacy glass, rearview camera, remote keyless entry, tire pressure monitors and dual-zone climate control. The SEL goes further than that though, with extra standard features that include heated front seats, 10-way power driver's seat, 6-way power front-passenger seat, and San Macassar wood-appearance appliqués on the instrument panel and door-trim panel.

The NHTSA hasn’t crash-tested the Ford Flex so far, but it does come with all the usual safety features you’d expect, but the SEL is available with an optional feature you don’t see elsewhere, which is second-row seatbelt airbags, which hold passengers in place better than conventional airbags and helps make this a good choice for families.

Thanks to a 118-inch wheelbase that's one of the longest in its class, the Flex has a good amount of passenger space in all three-rows and there's even 20 cu.-ft. of cargo space available in the rear with all three-rows of seats in place and in use. Fold down the third-row when not in use and that grows to 43 cu.-ft., and with the second-row also folded for those occasions when you need to move a large load from A to B, you can then make use of a cavernous 80 cu.-ft. of cargo space.

For more details about the 2019 Ford Flex SEL and to try one out for yourself on a test drive, get in touch with us today and check out our new vehicle specials here at Southern California Ford Dealers, the number one choice Ford dealers.