If you want to see how far SUV design and styling has come in recent years, just take a look at the original Ford Escape and compare it to the current 2019 Ford Escape. It’s hard to believe it's the same vehicle, but to be fair, the Escape is one of the most overtly sporty models in the compact crossover segment. In fact, sporty wasn't really on the agenda back in 2000 when the Escape first went into production. Of course, the Escape isn’t a luxury model, so let's see how it gets to that description by taking a look at the range-topping 2019 Ford Escape Titanium.

The model we have right now is part of the third-generation of the Ford Escape Titanium, and it could hardly be more different from the previous second-generation. There are plenty of macho, rugged-looking Ford SUVs in the current lineup, and there are more on the way. The Escape goes in a completely different styling direction, and although the Titanium isn’t a sport-focused trim level like Ford uses elsewhere in its range, such as ST or ST-Line, but even the upscale trimmings don’t detract from the Escape's inherent sleek, sporty lines and silhouette. It's a bit of a flying wedge with a hint of training shoe about it, and that probably accounts for its wide global appeal.

Even if you’re not convinced by the fancy features and tech you get for the extra money with the Escape Titanium trim level, this model is well worth considering purely on the basis of the engine it comes equipped with. There are three engines available in the Escape family, but only the Titanium trim gets you the 2.0-liter EcoBoost turbo-four as part of standard equipment. In fact, you can’t even specify this engine as a cost-option with other trims. The engine puts out a mighty impressive 245 horsepower and 275 lb.-ft. of torque, and you'll certainly notice that amount of power and twist in a vehicle as compact as this. The power is sent to your choice of the front or all four wheels through a six-speed SelectShift automatic transmission with Auto Start-Stop Technology for improved fuel economy. This is a model where you might actually use the paddle shifter on the steering wheel because this combination gets the Escape Titanium from 0 to 60 mph in just 4.0 seconds.

The Titanium has a lot of desirable features also found on the SEL, which include a power liftgate, a reverse sensing system, dual-zone climate control, remote start, and the Sync3 infotainments system with an 8.0-inch touchscreen, and Apple CarPlay and Android Auto compatibility. On top of that, the Titanium adds things like voice-activated navigation, hands-free foot activation for the power liftgate, memory driver's seat, heated steering wheel, a 12-speaker 390-watt Sony audio system, 18-inch alloys, ambient lighting, blind spot monitors, and plenty more.

To find out more about the 2019 Ford Escape Titanium and to experience it for yourself on a test drive, get in touch with us today here at Southern California Ford Dealers, the number one Ford dealers for all your automotive needs. 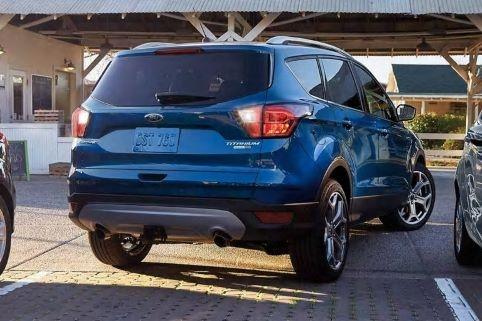